• Basics: fat-soluble antioxidant, acts as a co-enzyme in cellular membranes and serves as a scavenger for free radicals.
• Benefits: vitamin E maintains the integrity of the body’s intracellular membrane, helps protect against heart disease and the development of cancers by enhancing immune function.
• Dosage: 10 mg/day for the adult man, 8 mg/day for the adult woman, and 3 mg/day for the infant.
• Sources: vegetable oils and products made from these oils, wheat germ, nuts and green leafy vegetables.
• Deficiency: vitamin E deficiency affects the central nervous system and may result in progressive neuromuscular disease.
• Overdose: vitamin E overdose may interfere with the body’s ability to clot blood, posing a risk to people taking blood thinners.

When only the best will do, Perfect E is the most complete and highest quality Vitamin E product available. Perfect E contains all the vitamin E compounds including extra gamma tocopherols and palm tocotrienols. Perfect E by Vitabase is manuafactured according to the highest pharmaceutical standards and uses only the best quality raw ingredients. Click here for more information.

Natural vitamin E d-a-tocopherol is extracted from deodorised distilled oil [d.d.o] which is separated from vegetable [generally soya] oil after crushing. The natural form of vitamin E is clearly superior in terms of absorption and retention in the body. The name “tocopherol” was derived from the Greek words for childbirth (tos), to bring forth (phero), and the chemical designation for an alcohol (ol).

Vitamin E is often used in skin creams and lotions because it is believed to play a role in encouraging skin healing and reducing scarring after injuries such as burns.

Vitamin E is one of the many nutrients that have protective properties. The main function of vitamin E is to maintain the integrity of the body’s intracellular membrane by protecting its physical stability and providing a defense line against tissue damage caused by oxidation. Vitamin E is absorbed from the intestines, along with fat and bile salts, first into the lymph and then into the blood, which carries it to the liver to be used or stored. Vitamin E acts as a co-enzyme in cellular membranes and serves as a scavenger for free radicals that are destructive to the membrane and internal cellular components. Vitamin E in supplements is usually sold as alpha-tocopheryl acetate, a form that protects its ability to function as an antioxidant. The synthetic form is labeled “D, L” while the natural form is labeled “D”. Commercially available blends of natural vitamin E include “mixed tocopherols” and “high gamma tocopherol” formulas.

The most important function of vitamin E is to maintain the integrity of the body’s intracellular membrane by protecting its physical stability and providing a defense line against tissue damage caused by oxidation. Vitamin E is protective because it helps reduce oxidation of lipid membranes and the unsaturated fatty acids and prevents the breakdown of other nutrients by oxygen. Vitamin E is an antioxidant that prevents free radical damage in biological membranes. Free radicals can cause cell damage that may contribute to the development of cardiovascular disease and cancer. Vitamin E has an effect on several enzyme activities and membrane properties.

It is involved in the regulation of vascular smooth muscle cell proliferation and protein kinase C activity. Vitamin E as an antioxidant helps to stabilize cell membranes and protect the tissues of the skin, eyes, liver, breast, and testes, which are more sensitive to oxidation. When applied to the skin, vitamin E-containing creams or oils are believed to promote healing, protecting cells from free-radical damage and reducing itchiness. Many people use such products to ensure optimal skin health. The protective, nutritional antioxidant function of vitamin E is also performed and enhanced by other antioxidants, such as vitamin C, beta-carotene, glutathione (L-cysteine), and the mineral selenium. 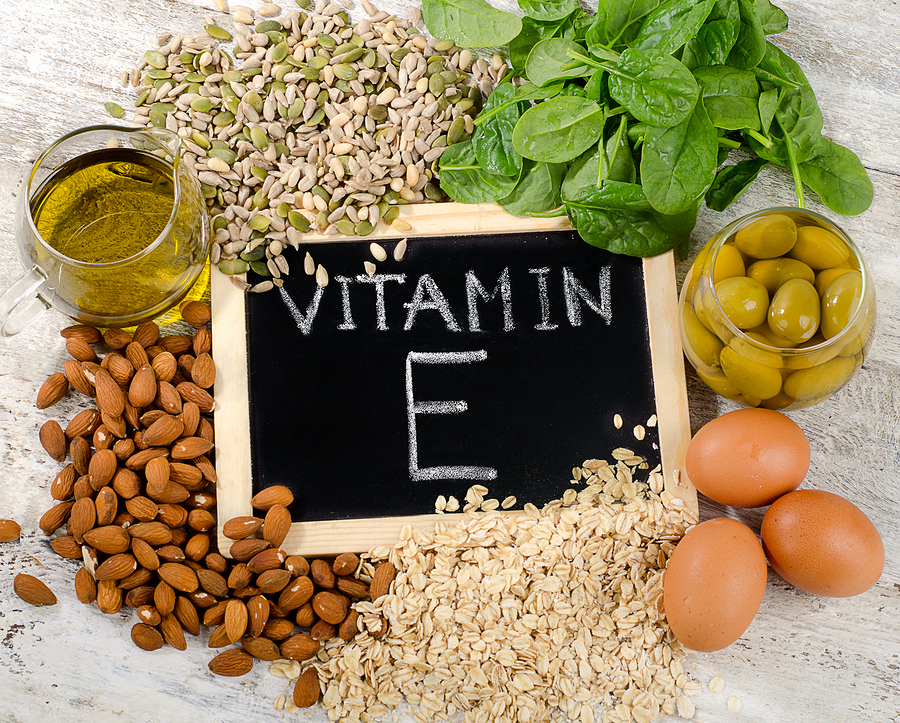 Vitamin E and heart disease – Vitamin E helps protect against heart disease by limiting the oxidation of LDL-cholesterol. Vitamin E helps prevent oxidation of lipoproteins, particularly in smokers, and reduces the stickiness of platelets in the bloodstream. Vitamin E also keeps arteries flexible and elastic, allowing blood to flow freely. Vitamin E helps prevent arteries from clogging by blocking the conversion of cholesterol into the waxy fat deposits called plaque that stick to blood vessel walls. Vitamin E also thins the blood, allowing for blood to flow more easily through arteries even when plaque is present. Vitamin E also may help prevent the formation of blood clots, which could lead to a heart attack. Vitamin C and vitamin E, taken in combination, help to stabilise LDL cholesterol in the body. This may help to reduce the risk of atherosclerosis.

Vitamin E and cancer – Some cancers are believed to result from oxidative damage to DNA caused by free radicals. Free radicals can damage DNA, leading to mutations in cells that may cause cancer. Antioxidants such as vitamin E help protect against the damaging effects of free radicals. The vitamin may also help fight cancer by boosting the immune system. Vitamin E may protect against the development of cancers by enhancing immune function. Some evidence associates higher intake of vitamin E with a decreased incidence of prostate cancer and breast cancer. Cigarette smokers have a higher risk of developing cancers of the mouth, upper airways and lungs, and vitamin E may help protect smokers against these cancers through its antioxidant properties.

Vitamin E and cataracts – Because of it’s antioxidant action, vitamin E may help to protect against cataracts and age related macular degeneration. Cataracts are growths on the lens of the eye that cloud vision. They increase the risk of disability and blindness in aging adults. Lens clarity, which is used to diagnose cataracts, is better in regular users of vitamin E supplements and in persons with higher blood levels of vitamin E. Uveitis is another eye disorder for which the antioxidant vitamins C and E may be helpful. Uveitis is inflammation of the uvea, the middle layer of the eye between the sclera and the retina.

The recommended dietary allowance (RDA) for vitamin E is 10 mg/day for the adult man, 8 mg/day for the adult woman, and 3 mg/day for the infant. In April 2000 the FNB raised the RDA for men by 50 percent and nearly doubled the RDA for women. The new RDA is 15 milligrams for both sexes, including pregnant women. For lactating mothers it is 19 milligrams. This is for natural or natural-source alpha-tocopherol. However, The amount of vitamin E required depends upon body size and the amount of polyunsaturated fats in the diet, since vitamin E is needed to protect these fats from oxidation.

Vitamin E is found in the germ of a seed or grain. Most of the nutrients are concentrated there. Whole-wheat flour contains much of the original germ, so it has vitamin E. Refined flour, or white flour, has been stripped of many of its nutrients, including vitamin E. Vitamin E is found in many common foods, including vegetable oils (such as soybean, corn, cottonseed and safflower) and products made from these oils (such as margarine), wheat germ, nuts and green leafy vegetables, although the researchers evaluated only the pill form of the vitamin. The best sources of vitamin E are vegetable oils such as sunflower, canola, corn, soybean and olive oil. Nuts, sunflower seeds and wheat germ are also good sources. Other sources of vitamin E are whole grains, fish, peanut butter, and green, leafy vegetables. The richest sources of the vitamin are found in unrefined edible vegetable oil, including wheat germ, safflower, sunflower, cottonseed, canola and olive oils. In these oils, approximately 50 percent of the tocopherol content is in the form of alpha-tocopherol. Other foods containing vitamin E include unrefined cereal grains, fruits, nuts and vegetables.

There are three specific situations when a vitamin E deficiency is likely to occur. It is seen in persons who cannot absorb dietary fat, has been found in premature, very low birth weight infants (birth weights less than 1500 grams, or 3 1/2 pounds) and is seen in individuals with rare disorders of fat metabolism. Infants are born in a state of relative vitamin E deficiency.

Vitamin E deficiency in premature infants persists during the first few weeks of life and can be attributed to limited placental transfer of vitamin E, low tissue levels at birth, relative dietary deficiency in infancy, intestinal malabsorption, and rapid growth. Premature infants may be at risk for vitamin E deficiency because they may be born with low tissue levels of the vitamin, and because they have a poorly developed capacity for absorbing dietary fats.

The health risk of too much vitamin E is low. Vitamin E appears to be safe when consumed in amounts up to 1,000 IU a day. The National Academy of Sciences has established the daily tolerable upper intake level for adults to be 1,000 mg of vitamin E, which is equivalent to 1,500 IU of natural vitamin E or 1,100 IU of synthetic vitamin E. Doses of over 800 IU a day of vitamin E may interfere with the body’s ability to clot blood, posing a risk to people taking blood thinners (anticoagulants). 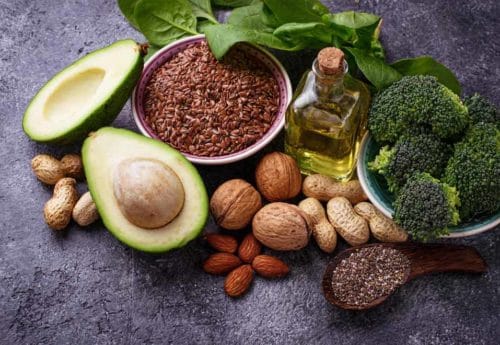